When I asked my Dad the other day about my transplant he said the following  “I can easily talk about the facts of those few weeks, but I struggle to sum up my emotions. It was so hard, I just cried a lot. I had dedicated my whole life to protecting you and your sisters from harm. There you were hours from death and there was nothing I could do.”

As a parent, I can’t even imagine that feeling of helplessness. Of course he cried.

After that conversation, he sent me this reflection below. I’ll let him tell his story.

“I can tell you many things about the dates and facts of Lisa’s August 13, 2000 emergency Liver Transplant.  I’d also like to reflect on some of my own emotions however. In a nutshell, I went from absolute despair, to hope, to rejoicing, over the course of just a few days.

Kath and I were initially told that Lisa had Hepatitis and that after a few days in the hospital she’d start to get better and return home.  Kath and I were shocked a day or two after admission when a pair of Transplant Physicians, Doctors Humar and Ramcharan, told us her lab values were continuing to worsen, and that she would likely need a Liver Transplant.  Hours later their prediction was confirmed.  Slurred speech and drowsiness were added to Lisa’s yellowish eyes and skin.  I sang a song called “I’m Trading My Sorrows” to her.  She smiled at my attempts, joined in as best she could, and shortly after, drifted into oblivion.

As the family protector I presented myself as a live-donor, but was rejected because of a fatty-liver condition I didn’t know I had.  Norm, Van, and Greg all considered donating half of their livers for Lisa, but the best candidate was determined to be our oldest daughter, Laura.  Kath and I objected to the prospect of two of our three daughters simultaneously undergoing major surgery, but Laura was adamant about trying to save her sister.

While she awaited surgery a breathing tube was inserted into Lisa’s throat to ensure an airway.  At one point, during a possible seizure, she bit down on the tube effectively blocking her own air supply.  I desperately massaged her jaw muscle to loosen her bite which is what my First Aid Training had taught, but it was to no avail.  Thank God, a Resident Physician was able to accomplish what I couldn’t!  That’s where the “despair” part came in.  I realized that in spite of all my emergency training and experience, there was absolutely nothing I could do to save my precious daughter.  I collapsed to the floor, sobbing.  I hadn’t cried that way for a very long time, but did so regularly until the “hope” part began.

The “hope” part did begin however. We were told that a donor had been found, and that the transplant would begin as soon as the liver could be retrieved.  (We found out weeks later that a woman named “Cheri” had died in an accident, and that her survivors agreed to organ donation.) Several friends remained at our side to encourage us, although most, including me, fell asleep during the wait. After what seemed like an eternity, we were awakened and told that the surgery would soon begin. I again slept for a few hours in the waiting room, and was awakened shortly before the Transplant Surgeon, Dr. William Payne, came and announced that the surgery was complete. I remember him remarking on the unusually large number of family members and friends who were present in the waiting room. But the news he gave about the surgery was good.

The “rejoicing” part began cautiously.  The surgery was over, and Lisa’s lab work was markedly improved which indicated the transplanted liver was working.  But she was still unconscious.  After roughly two days of unconsciousness Lisa opened her eyes!  She still had a breathing tube and so couldn’t talk, but at least her eyes had opened!  I excitedly called Kath to share the good news, and she and the girls soon arrived to witness the miracle we’d been praying for.  After several more days of normal liver function and rehabilitation, Lisa returned home, and began the first chapter of her physical rebirth

All of our family members (certainly I) rapidly transitioned from absolute despair, to cautious hope, to praise-filled rejoicing!  Lisa’s liver transplant continues to be a major landmark in my life as an individual, and in our lives as a family.”

Dad, you have been an incredible protector for our family. Thank you for doing what you can, crying when you can’t and trusting The One who can. 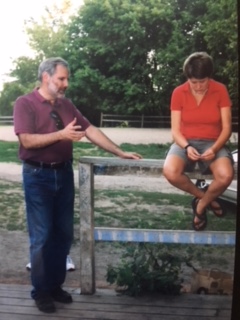 My Dad sharing at my 1 year anniversary party. 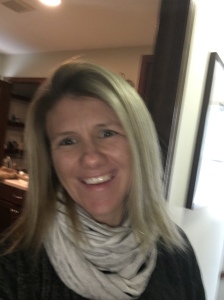 Hi, I’m Lisa. I live in Minneapolis with my 2 kids and my husband. I’m a runner and a certified personal trainer. I have had to fight for the full life promised to me. I passionate about helping others take the next step physically, emotionally or spiritually towards the full life God intended for them. To hear more of my story click here.