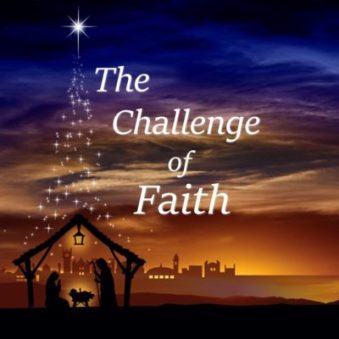 Yet, Mary answered “I am the Lord’s servant…May your word be fulfilled.” Luke 1:38

Then there is Joseph. I feel kind of bad for him. He is a key player in the story, but was given very little stage time. We know that he was a noble man. Even before the angel appeared to him, he was still committed to marrying Mary. Then after an angel appeared to him in a dream we learn, “When Joseph woke up, he did what the angel of the Lord had commanded him and took Mary home as his wife. (Luke 1:24). Just like that.

Most of us have heard these stories many times, especially this time of year. I know for me, I can easily forgot one key piece, Mary & Joseph were humans. They were mere mortals. They were people who had parents, sisters, brothers. They had friends. They had hobbies. They grew up, they had histories. We know little about them, we don’t even know where they met.

But of one thing we can be sure, they were both people of incredible faith.

We are in the second week of Advent, a week designated to meditate on faith. On Sunday, people all over the world lit a candle, the Bethlehem Candle. As the candles were lit, we were reminded of Mary & Joseph’s journey to Bethlehem. We were charged to remember their journey and to follow their lead.

To rise up as a people of faith.

Last week I talked about hope. The question I have been asking myself this past week is, what is the difference between hope & faith?

I started by looking at the basic definitions, hope is “a feeling of expectation and desire for a certain thing to happen.” Faith is defined as “complete trust or confidence in someone or something.” Hebrews 11:1 tells us that “Now faith is confidence in what we hope for and assurance about what we do not see.”

You see, hope precedes faith. Hope is the foundation in which we build our faith. It is not an accident that the first week of Advent challenges us to renew our hope; to be reminded of what God has done, what he is doing, and what is still to come. Knowing who God is gives us a spirit of expectancy – hope. Only when we have hope in the Lord can we have faith. When we are able to have full confidence and trust in Jesus – we become people of faith.

Let me share an example. My kids really enjoy eating at McDonalds. Say I tell them on Wednesday that we are going to eat McDonalds on Friday. For the next couple days they have hope – they are full of expectancy – thinking about going to McDonalds. They have hope because over time I have proven to them that I keep my promises (to the best of my ability). So when I ask them to be ready to go on Friday at 5:00 to leave for McDonalds, they have faith I will be there. They are ready to go. They have complete trust and confidence in me. Their hope spurred their faith in me, which motivated them to act.

As you can see in the example, hope speaks to the future and the past. Faith speaks to our today. Not only does faith speak to our today, it gives us the courage to act.

I often talk about God speaking to me. For many people, I’m sure that sounds weird and out there. God speaks to all of us; most of us just don’t take the time to listen. Often God speaks to us with a simple nudge; that feeling in your gut. It’s that persistent nagging that tells you to apply for that job, reach out to that friend or make a simple course correction. It’s when someone says something in passing that you can’t forget, no matter how hard you try. It’s when you read the Bible and the words that you have read a hundred times seem to float off the page-like God is speaking them directly to you.

And then sometimes even an angel appears.

You see, God will speak to us. We just need to learn to listen. It is also our job to cultivate enough hope that we become full of faith. That way when God does speak to us, our confidence & assurance in who he is will inspire action. We do that by spending time reading God’s word, declaring what he has done and reminding ourselves of what he will do in the future.

These next couple weeks before Christmas are a great time to exercise your faith. People’s needs and emotions are front and center. In the midst of your busy days, take a moment to listen to those nudges. Text a friend, remind them how loved they are. Give more than you planned. Smile at a stranger. Share your faith with your co-worker. Take a step of faith.

This Christmas season let’s join Mary & Joseph and rise up as a people of faith.

Hi, I’m Lisa. I live in Minneapolis with my 2 kids and my husband. I’m a runner and a certified personal trainer. I have had to fight for the full life promised to me. I passionate about helping others take the next step physically, emotionally or spiritually towards the full life God intended for them. To hear more of my story click here.